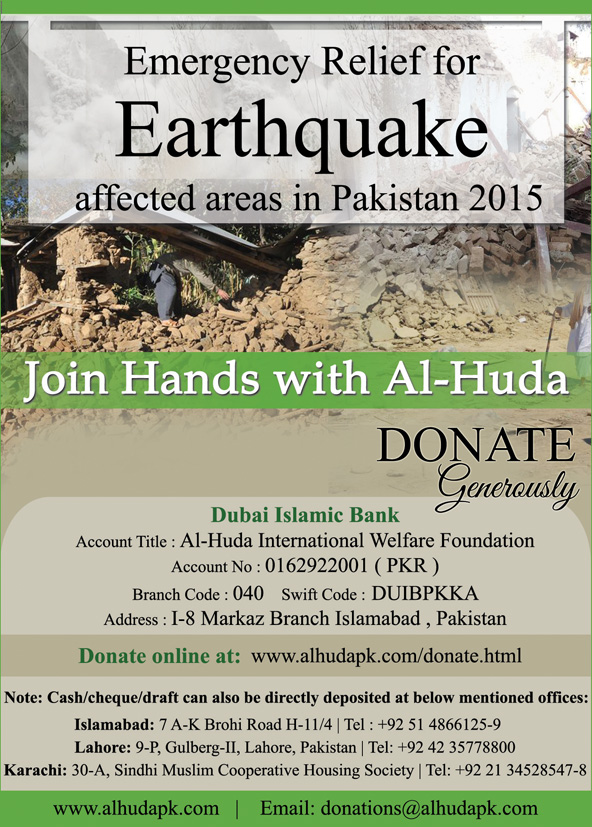 And they give food out of love for Him to the poor and the orphan and the captive:

إِنَّمَا نُطْعِمُكُمْ لِوَجْهِ اللَّهِ لَا نُرِيدُ مِنكُمْ جَزَاءً وَلَا شُكُورًا
We only feed you for Allah’s sake; we desire from you neither reward nor thanks:

Join hands with Alhuda in Relief efforts for 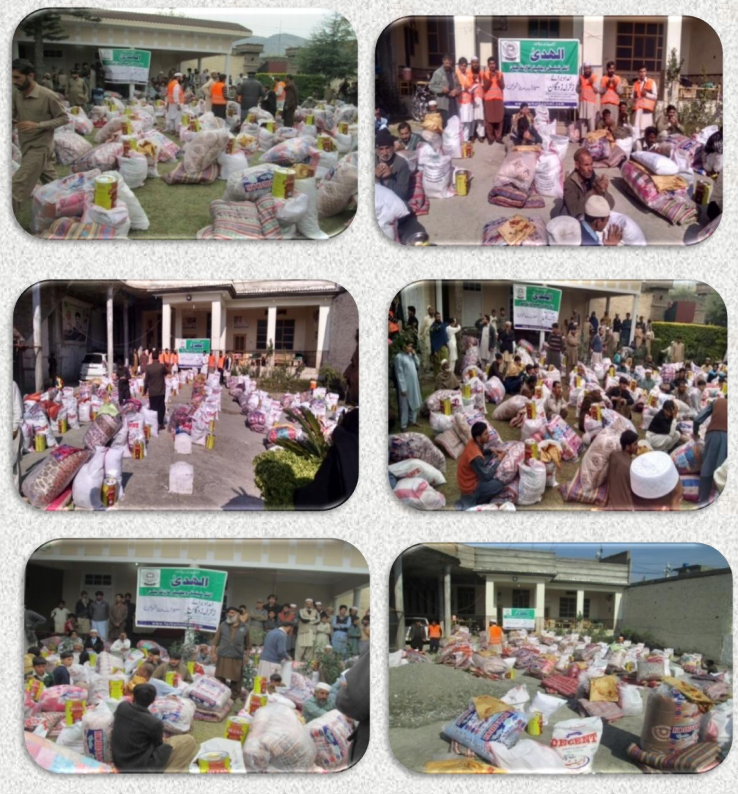 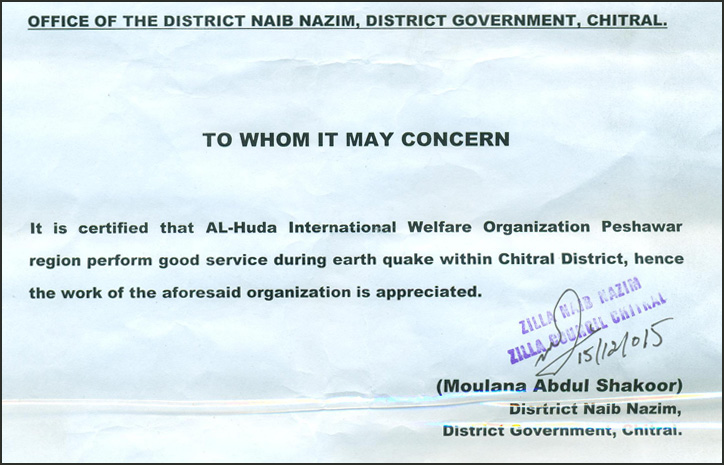 The 2013 Pakistan earthquake with a magnitude 7.7 occurred on 24th September, with an epicentre 66 kilometres north-northeast of Awaran in the province of Balochistan. At least 825 people were killed, and hundreds more were injured.  On 28th  September another earthquake with a 6.8 magnitude hit Pakistan at a depth of 14.8 km, killing at least 22 people.

Al-Huda International started relief activities soon after the earthquake and teams visited the devastated areas, providing as much relief as possible. Details of relief activities by Al-Huda can be found below.

In October 2005, a major earthquake measuring 7.6 on the Richter scale jolted northern parts of Pakistan. The catastrophic quake left more than 82,000 people killed and more than 3.3 million people injured and homeless. With more than 1,000 hospitals destroyed, the looming threat of illness and the harsh Himalayan winters, the need for action in the face of this emergency was tremendous. Al-Huda set up a dedicated relief cell where welfare work for the earthquake affectees was carried out round-the-clock. Relief goods were collected from all over the country and abroad, packed and distributed in the affected areas. The total relief comprised of 3 helicopters, 29 trucks (1 truck contains stuff for 1000 people), 138 mini trucks, 1 bus, 26 vans and 269 cars. Futher deatils are enlisted below

Al-Huda went all-out to help those caught in the aftermath of the destructive earthquake. A dedicated relief cell was set up at Islamabad where goods required for the helpless and injured were collected and packed by the staff, students and volunteers who worked round the clock to ensure that aid reaches the victims as soon as possible. Al-Huda also collaborated with trustworthy organizations and Pakistan Army to distribute the materials in demand effectively. For instance, PIMA was given 100 food packs each containing 2-3 kg rice packs, grams, lentils, sugar, tea, dry milk, matches, etc. for distribution in Neelam Valley where thousands of people had not received any help whatsoever.

Al-Huda combined its forces to do its utmost to alleviate the sufferings of innocent people. All branches of Al-Huda across the nation including those in Karachi, Peshawar and Lahore contributed generously. Karachi branch alone sent Rs.1,000,000 for the earthquake victims.

Moreover, the international wing of the Foundation was also active with contributions from UAE (branches in Dubai, Sharjah and adjacent areas), North America with contributions not just from regular students but also from listeners, correspondence students and even non-muslims. Al-Huda staff, students and volunteers helped in every possible way to provide support and care to the survivors of the quake. Head of relief campaign at Islamabad went with PIMA on a helicopter twice to visit Kathai in Azad Kashmir and provide provisions.

Al-Huda tried to access the areas not accessed till then so that the helpless people could be saved. The areas targeted by Al-Huda were:

On the occasion of Eid, Al-Huda distributed meat of 19 goats and 17 cows in the quake struck areas Alahmdulillah.

For complete progress detail of the relief work carried out by Al-Huda on a day to day basis.

Al-Huda strived to send immediate relief to the affected areas in order to help alleviate the suffering caused by starvation, cold weather, disease, serious and life threatening injuries and continuous deaths. The total relief comprised of:

To help the quake-affectees survive the harsh winters, Al-Huda started a rigorous campaign to collect funds on an urgent basis to build corrugated iron shelters/roof, strong enough to withstand snow and hailstorms. A total of Rs. 1,330,000 was spent on the shelter plan with 1 sheet approximately amounting to Rs 1000.

Al-Huda supplied basic requirements to the affected people who had shifted to Islamabad, Peshawar, Pindi and their suburbs in shelter camps, relatives’ homes/Post medical centers and hospitals.

Al-Huda teams visited Post Medical Care Center, Community Center in Islamabad with small gifts as token of love and kind words to help women and children come out of hopelessness. The team spent quality time in counseling them by helping them compose there shattered personalities, assisting them while moving, doing massage, oiling and combing their hair, doing dam on painful body parts, teaching them duas, shared their grief and showing them new hope towards life, by bringing them closer to Allah.

Apart from sending relief items to the mentioned locations, Al-Huda also provided support to local hospitals which are overwhelmed by the amount of injured people admitted. Al-Huda teams visited PIMS, Shifa, Holy Family Hospital and Fauji Foundation in the twin cities of Rawalpindi and Islamabad which were in dire need of medicines, food, clothing and shelter. Medicines worth Rs.25, 000 were sent to them along with many other things.

Al-Huda team specially focused on the orphaned, homeless and injured children at PIMS Children Hospital and NISE (National Institute for Special Education), Islamabad who had been through an unimaginably painful experience at such young ages.

More than 300 orphan children were Alhamdulillah also taken care of.

At a relief camp set-up at H-11 sector in Islamabad, a school was established by Al-Huda where the affected children and women were taught knitting, stitching and needle work in order to enhance their skills of earning a livelihood. It was here at Al-Huda camp that Al-Huda initiated to provide true Islamic education in the light of Quran and Sunnah to 488 students along with regular education (English, Urdu, Mathematics and Sciences). This greatly helped them connect to Allah, understand the situation in which they were and focus on improving their actions (اعمال) and build good character.

Al-Huda initiated a special Saut-Al-Quran course (link here to saut al Quran) for over 70 earthquake affected females at the Al-Huda institute Islamabad. These students were provided uniform, books, stationary, transportation, pocket money for personal needs, hostel and mess facility. The Quran showed them a light, a hope and a reason to live.

In winter 2007, the earthquake affected area of Kalam came in the grip of severe cold. Blankets and sweaters worth Rs.100, 000/- were sent to the affected people.